Want to know one of the greatest feelings there is as a runner that lives at sea level? Your first few runs back home immediately following some nice mileage in high altitude.

Over the last two weeks I hiked and partially ran close to 200km in the Rockies of Montana, Alberta and British Columbia. The vast majority of that mileage had been completed prior to the smoke rolling in.

Which brings me to present day, late August back in good ol’ Ottawa, Ontario. Home. Blue skies, clean air and green everywhere you go. I’ve missed this place. The other day I went on a run, my first one since my trip, that lasted a short four kilometres. My pace felt strong and my lungs were oh so happy. Fast forward to today and I went on a 5+km run in about 22 minutes that felt comfortably easy. My pace felt strong, my strides felt good and the oxygen was plentiful!

It’s a stark contrast to running up to the Bow Summit to view Peyto Lake and running from the parking lot to the lookout in an attempt to catch the sunset at 2200m above sea level. With the uphill trail and my pace, each breath became shallower and shallower. What a feeling it was, then, a couple of days later, running around familiar grounds and feeling as if nothing could slow me down.

I have the Golden Ultra coming up in about a month’s time. It’ll be taking place in Golden, British Columbia and in all honesty, I should have trained more and harder for it than I have up to this point. It’s something I’ll correct the next time I train for an ultra, or even a race in general. The biggest issue I have with long slow runs, as necessary as they are, is not going fast. I love speed. I love knowing that I’m moving quickly and pushing the pace. I thrive off of that. So for someone with that mindset, you could see how purposefully running at a slow pace would drive me crazy. It’s just something I have to get better at I suppose.

With the time I have left, I look forward to putting that work in and making race weekend the best that it can possibly be. 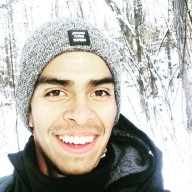